On August 6, 2020, religious men within five years of final vows or ordination from more than 28 provinces and monasteries across the United States met online for the first-ever national gathering for young religious sponsored by CMSM.

Bishop Elias Lorenzo, OSB, immediate past Abbot President of the American-Cassinese Congregation of Benedictine Monasteries and a popular speaker at the 2019 CMSM National Assembly, gave a talk on hope before the men broke out into small groups for discussion and networking. Watch his talk here. 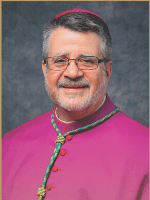 Most Reverend Elias Lorenzo, OSB
Auxiliary Bishop of Newark
Bishop Elias Lorenzo, OSB, was named Auxiliary Bishop of Newark earlier this year, with ordination on June 30, 2020. At the time of his appointment, he was Abbot President of the American-Cassinese Congregation, which includes 25 monasteries in 6 countries, sponsoring 9 colleges and universities and 14 secondary schools in North and South America.

Bishop Elias entered Saint Mary’s Abbey, Morristown, NJ, in 1983. He made his first monastic profession in 1985 and was ordained in 1989. He holds master’s degrees in liturgical theology and counseling psychology, and a licentiate in canon law. He has served in secondary school education and administration. For the Abbey, he served director of liturgy, prior, and rector of church. He was Vicar for Religious in the Diocese of Metuchen, and canonical counsel for Praesidium, Inc., during development of the National Standards, and serves on Praesidium’s advisory board.

For the global Benedictine Confederation, he served as prior of the college at Sant’Anselmo in Rome, and as Procurator General for the Order. He is a founding member and was president of the International Commission for Benedictine Education.